Recently we had the pleasure of trying Fueltone Pro’s latest DPF spray cleaner. After seeing so many different cleaners on the market we suggested to Fueltone the issues we have we repairing DPF faults and related issues. The result they supplied us with the demo tin of this cleaner.

Our first car was 2011 Ford Kuga that another garage was unable to find issue causing DPF to block up and told customer they would require new DPF and still have to find the cause of the issue.

We carried out basic DPF tests and confirmed there was issue with DPF pressure differential sensor. On further inspection we found the 2 pipes to the sensor were completely blocked. This is when we dug out Fueltone’s latest product and put it to the test. Since this is a spray and not a fuel additive we sprayed this done both pipes and left it for 5 minutes we could instantly see the carbon reacting and braking the carbon down. We then removed temp sensor from DPF and filled DPF with the cleaner, no DPF removed from vehicle. Once we confirmed pipes were clear and carbon free, we started the process of DPF forced regeneration with the aid of FUELTONE DPF fuel additive. We successfully got a DPF forced regeneration on this vehicle and vehicle has ran 4 weeks issue free now, with no expensive repairs. Once again, we have put our faith in the market leading fuel additive company and received fantastic results. 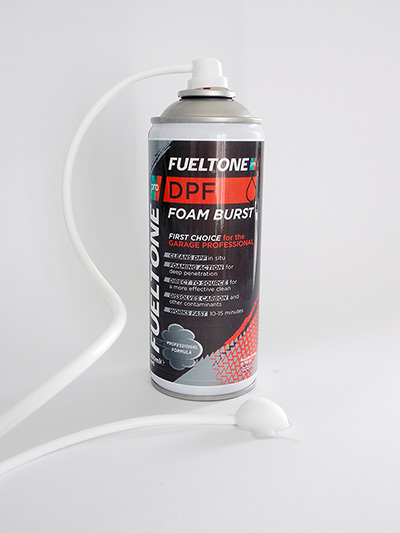 On a separate note since we have taken FUELTONE products in stock we have never replaced a DPF and we deal with DPF/EGR issues daily from both trade customers and the public.